Claimed to be the most photographed village in Spain, this white-washed pueblo is stunningly perched on the side of a sandstone mountain making it a popular spot among property buyers looking for authentic Spanish surroundings.

This vibrant and historic village will give you an authentic Andalusian experience, nestled on a hillside with its gleaming white bungalows and skinny cobbled streets. It has a population of just over 6,000 and – unlike some other parts of southern Spain – remains very much open for business all-year-round due to its high proportion of permanent residents. The Mediterranean ports of Sotogrande, Estepona and La Duquesa are all within a short drive.

Turn inland off the coastal road before the small fishing town of Sabinillas and head up through beautiful green valleys and forested hills on a windy country road into the Pueblo Blanco of Casares. Set in a mountainous landscape, the views of the Mediterranean and the north African coastline are breathtaking, and the surrounding area is known for its beauty and wildlife. 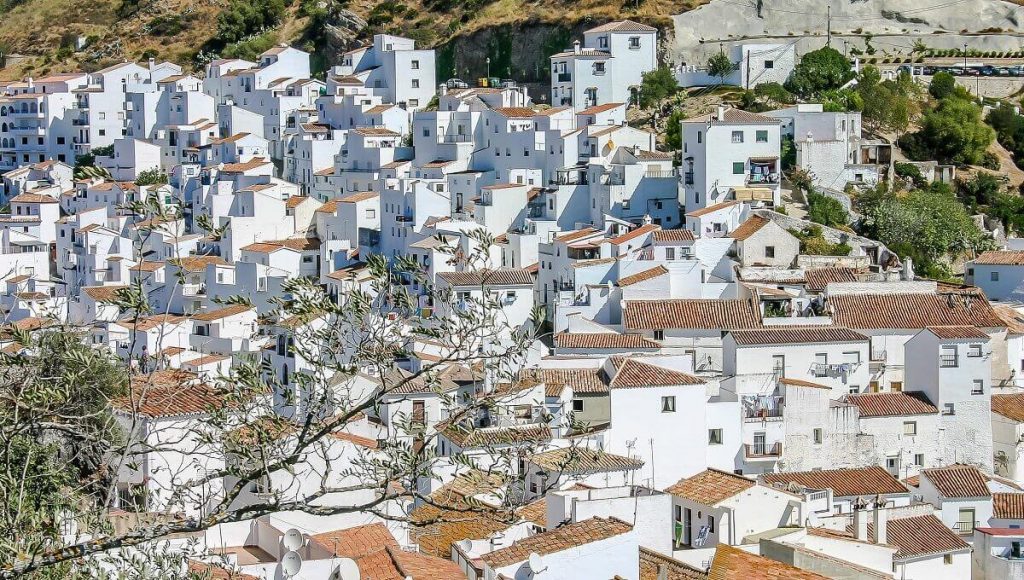 Casares forms part of the province of Malaga in the autonomous community of Andalusia in southern Spain. Located near the town of Manilva in the western region of the Costa del Sol. The area has a sub-tropical Mediterranean climate, with relatively warm winters and hot, dry summers. Temperatures average 32 ºC during the summer months. 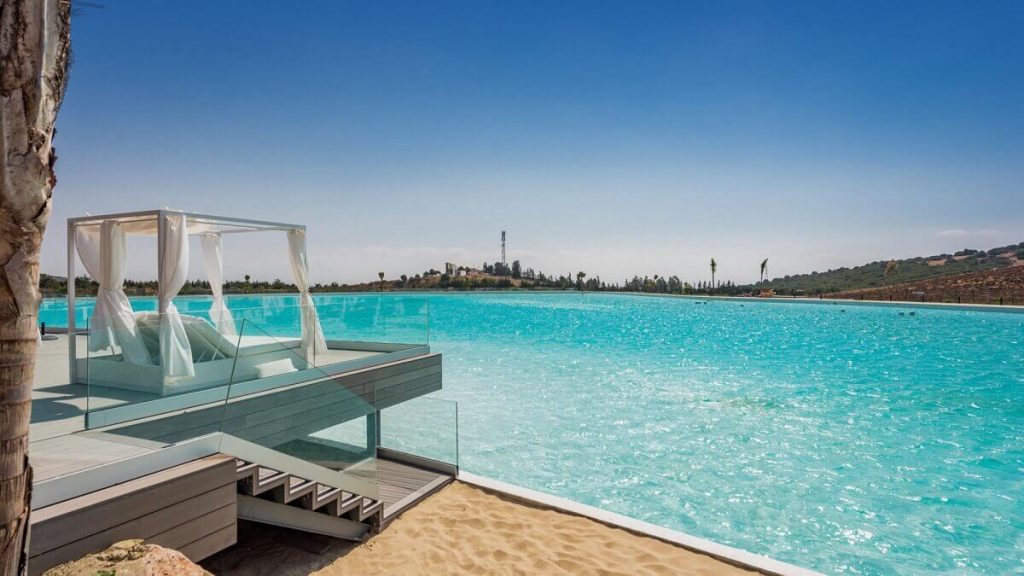 One of the richest men in South America has bet big on Casares building the Alcazaba Lagoon, a residential project of 78 apartments and penthouses priced between €285,000 and €500,000 for medium to high-end clients. The resort has 1.4 hectares man-made inland lagoon, the largest if it’s kind in Europe. 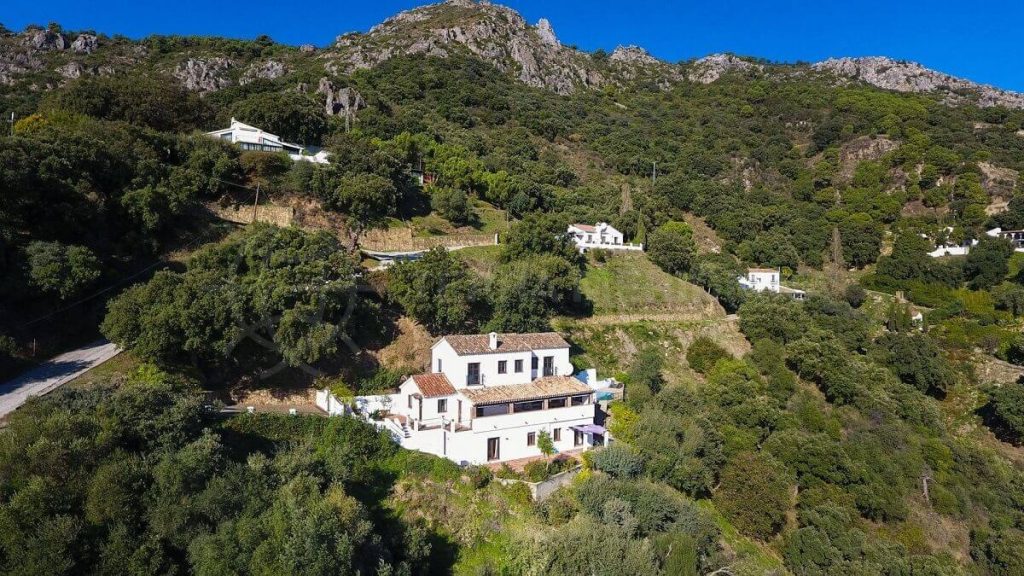 While many ex-pats have made their home in the quaint Village of Casares, the majority of foreign residents have purchased homes on the outskirts of the town – an area that offers not only an excellent choice of properties, but also space, privacy, and stunning views. You’ll find a range of properties here, from fincas and farmhouses to luxury villas.

Casares is split into two urban areas, the first of these is the village, and it’s surrounding area and the second is a small stretch of coast along the Mediterranean called ‘Casares Costa’. This beachside strip of residential urbanisations has a commercial centre with a few bars and restaurants. The majority of the properties are apartments and penthouses with high summer rental demand.

Luxury Villas for Sale in Casares

Villa Calima is a fully furnished villa for sale in…

Villa Siroco is a spectacular villa for sale in Seaviews…

Things to Do in Casares: Natural Beauty & Wildlife

Casares is beautiful in a simple, unpretentious way. It is the Spain of old and a refreshing break from the busy built-up resorts found along the coastline below. The area will appeal to outdoor enthusiasts and those looking to experience a real Spanish town. 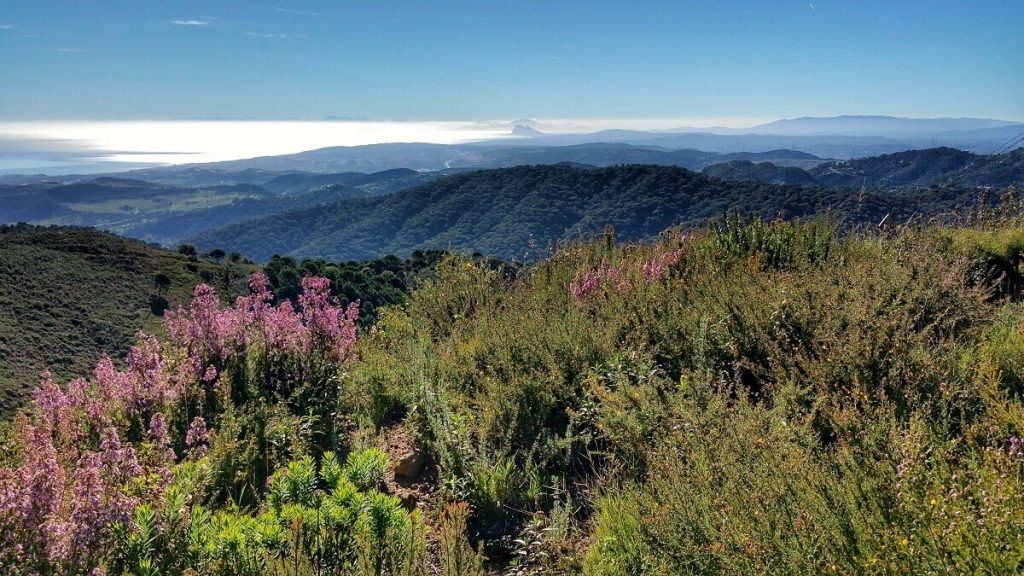 Eagles are known to frequent the surrounding mountains, and the area is one of the main migration routes to Africa for many bird species. The scenery around the village is beautiful and worth exploring from the stunning mountain ranges of Sierra Crestellina to the natural park ‘Los Reales de Sierra Bermeja’ nearby.

Places of Interest in Casares

The origins of Casares date back to Roman and Arab times, and it’s fabled Julius Caesar himself ordered its construction as a show of gratitude for having been healed by the waters of the Baths of La Hedionda in the valley below. An old Castle sits on the summit of the village called ‘Castillo de Casares’ some 1400 feet above the sea. The streets of the village are narrow and windy but within them are some historical gems like the Iglesia de la Encarnacion and Fuente de Carlos III.

Another historical wonder of Casares is the 16th-century church – formerly a Franciscan-Capuchin convent – known as Iglesia de la Encarnacion. More recently, restoration works have been carried out aimed at consolidating the building, and the Church remains in use today and is a true marvel of the town. 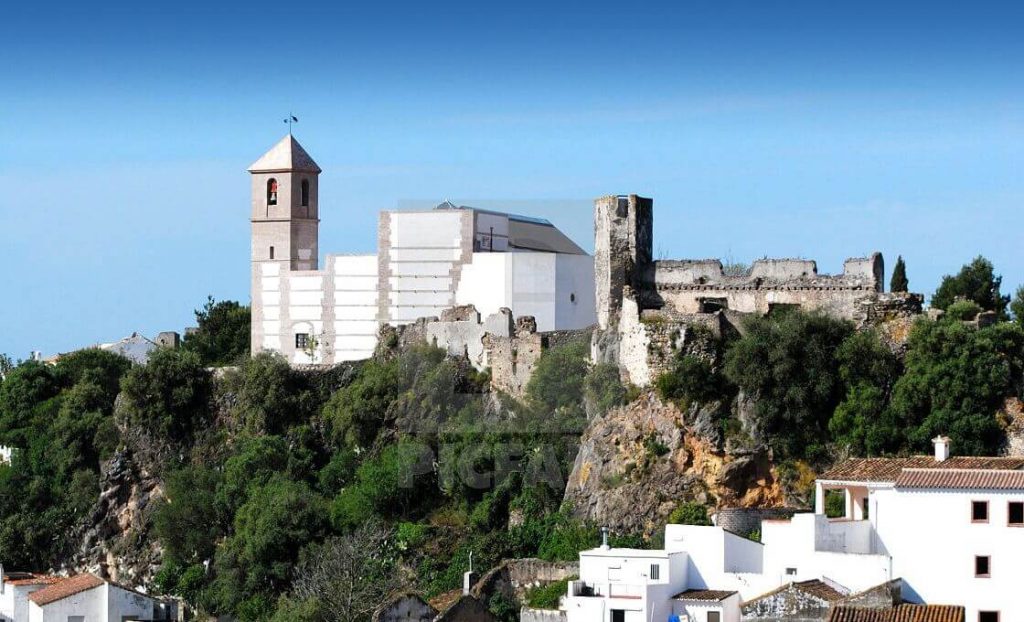 Perched at the top of the hill in Casares is the iconic Casares Castle (Castillo de Casares), which was built in the 12th century. The town grew around the castle during the Moorish occupation. In the following centuries, the village and its castle were conquered many times, but the structure of the castle remains remarkably intact today. Castillo de Casares is definitely worth a visit and has an almost fairytale-like appeal.

Located in the town centre, the fountain is a must stop picture spot for anyone visiting Casares. Constructed in 1785, it still today distributes fresh water into the town from the surrounding mountains. It is one of the historical emblems of this quaint village.

Apartments & Penthouses for Sale in Casares

3 bedroom penthouse with stunning sea views and within walking…

Solemar Casares Costa is a new development of apartments and…

Casares is a hub for authentic Spanish cuisine with many great restaurants and tapas bars. The cuisine is typical of the Andalucian region, with lots of seafood, rice and meat on the grill. There are several quaint village taverns in the plaza, but the best restaurants are on the winding road up to the village, and it is considered one of the most famous gastronomic routes on the Costa del Sol.

If you’re looking for seriously good food, then these three restaurants are a must-visit:

Owned and run by a Japanese / British couple the menu has a distinctly Andalusian feel but includes some Asian touches which elevate the food above many of the restaurants in the area. The interior has a rustic feel which compliments it’s hillside surroundings. I recommend you book in advance. 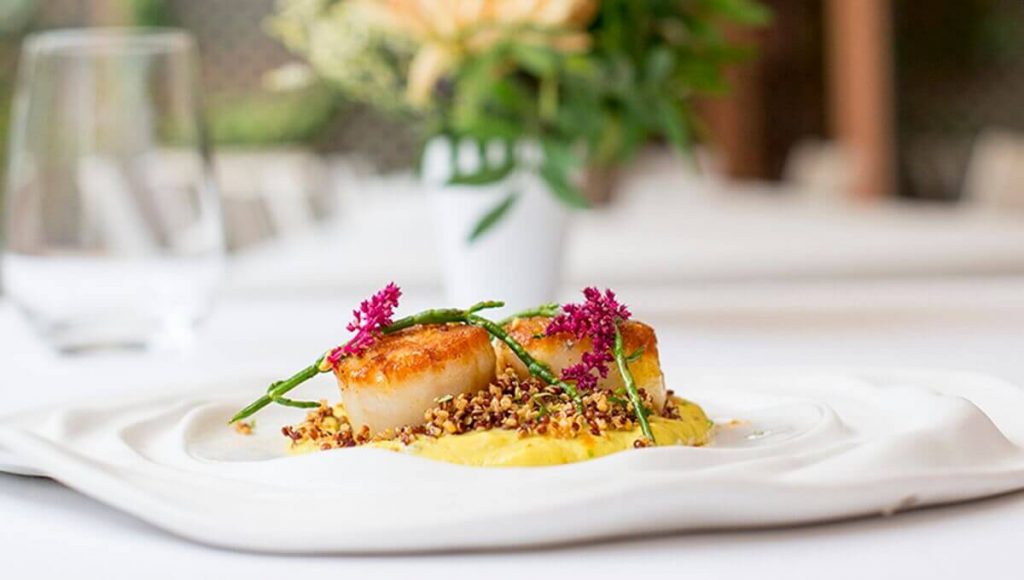 Kabuki Raw is Finca Cortesin’s signature restaurant and was awarded a Michelin star in 2017. The cuisine is a fusion of Japanese dishes with a Mediterranean twist. The restaurant is the standard-bearer for Japanese food in Spain.

A stunning setting, delicious food, charming ambience and excellent service make the Forge our top pick. The menu is varied and tasty, ranging from grilled meats and tajines to vegetarian dishes. It’s hugely popular among locals and tourists alike, so make sure to book well in advance.

Located halfway up the road to Casares lies the 5-star resort of Finca Cortesin. Home to one of Spain’s best golf courses, Finca Cortesin, near Estepona on the Costa del Sol, was built with luxury and exclusivity in mind. 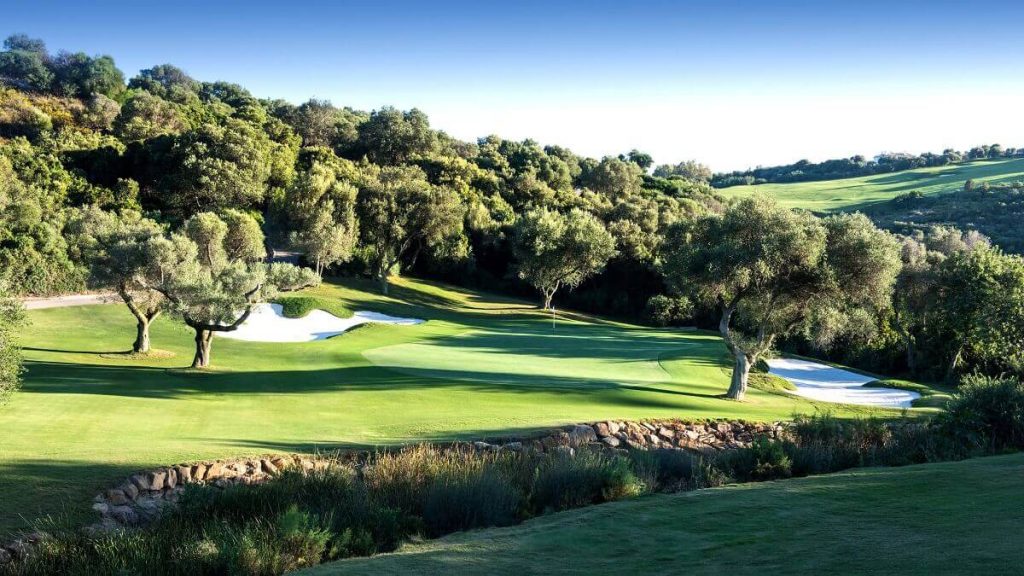 The Golf course is the longest in Europe with a total par of 72 and was designed by Cabell Robinson. There are five par 3’s, eight par 4’s and five par 5’s. With top-quality fairways and greens, and every detail considered, a round of golf at Finca Cortesin is buck list experience.

As Casares is set nearly 15km inland, you obviously won’t find any beaches in the town itself. The nearest beaches are those in Casares bay around 25 minutes drive away. 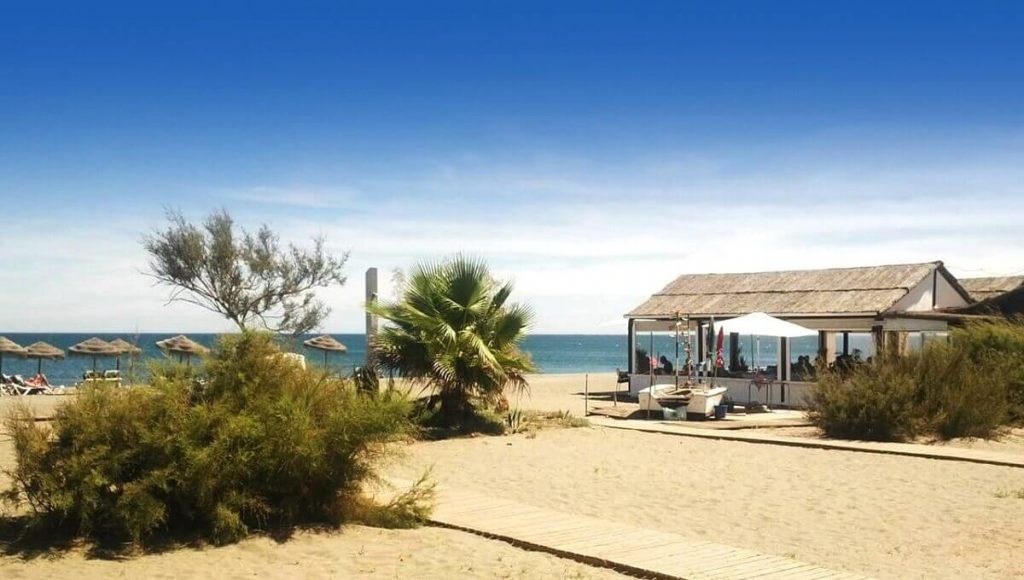 The beaches here are of a very high standard, with many being awarded the blue-flag status for excellence. However, a short drive to Estepona or Sabinillas will provide you with some of Costa Del Sol’s most beautiful beaches.

The history of Casares is fascinating. Indeed, one of the town’s claims to fame is that the Roman Emperor, Julius Caesar, was cured of a liver complaint after drinking the sulfuric waters that pour from the local springs nearby. Caesar was so grateful that he allowed the town of Casares to mint coins during the Roman Empire – a rare honour of the time. 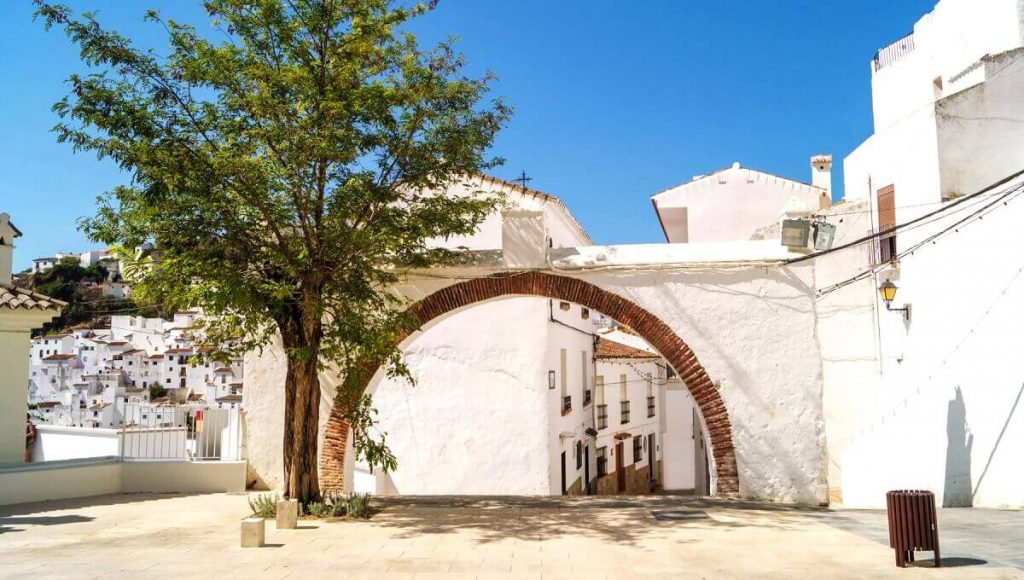 Another major moment in Casares’ history was that the town – along with Cadiz – were the only areas that Napoleon was not able to conquer in Spain. When you see the steep hills, the area is set on, plus the looming castle, you can understand why this village was impossible to seize.

Below, some of the most common questions about the Casares area have been answered. If you have any other questions, please don’t hesitate to get in touch.

Where in Spain is Casares?

Casares is situated in the province of Malaga as part of the autonomous community of Andalusia in southern Spain. It lies around 15km inland, with nearby towns including Estepona, Manilva and Duquesa.

How Far from Marbella is Casares?

What are the Nearest Airports to Casares?

The nearest major airport to Casares is Malaga Airport, which is a 70-minute drive away. For flights to the UK, Gibraltar Airport can also be reached in about 45 minutes.

Is Casares a Good Place to Live?

Casares is a beautiful place to live in the heart of Andalusia. Unlike some of the neighbouring towns that are tourist hotspots, Casares retains the authentic feel of southern Spain, while also enjoying the benefits of having the “sunshine coast” (AKA Costa Del Sol) nearby. For lovers of natural beauty and authentic culture, Casares could be your perfect location.

Off Plan Property for Sale in Casares

Please get in touch if you’d like to talk about real estate and property for sale in Casares (or even ask about Casarez property prices) I would love to hear from you.

New release in Casares Costa! Solemar is a new development…

See All Properties for Sale in Casares